Josh Langston has been the Director of Bands at Millennium Middle School since 1997, when the school was still Lakeview Middle School.  Under his tenure, Millennium Bands have established a tradition of high musical standards and performance.  Millennium Bands have consistently received Superior Ratings at FBA events, including Solo & Ensemble MPA, Jazz Band MPA, & Concert Band MPA.  It was also during this time that the Millennium Jazz Band, Symphonic Orchestra, and Drum Lines were formed.

Mr. Langston holds a Bachelor of Music Education from Stetson University on his principal instrument of the saxophone.  He received his Master of Science in Educational Media Design and Technology from Full Sail University. He is an active adjudicator for the Florida Bandmasters Association, has served as the FBA District 6 District Chairperson, and has received the FBA's Five-Year Superior Award. He has hosted many Music Education Senior and Junior Interns, many of whom are now gainfully employed music educators.

Mr. Langston is part of a musical family.  His wife and in-laws are all music teachers, and his two children, are both active musicians.  His cat, Leeroy Jenkins, tolerates all of the noise in the house. 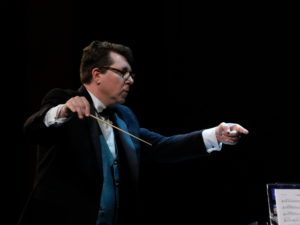